Scandinavia–such a whimsical and magical place: where forests, ice and ocean collide. The magnificence of this portion of the globe breeds art and illustration that is lively and inspiring. We couldn't give up the chance to focus on a few favorites from past to present! Such a daunting task as this will obviously take more than one entry–up next, Iceland and Norway! 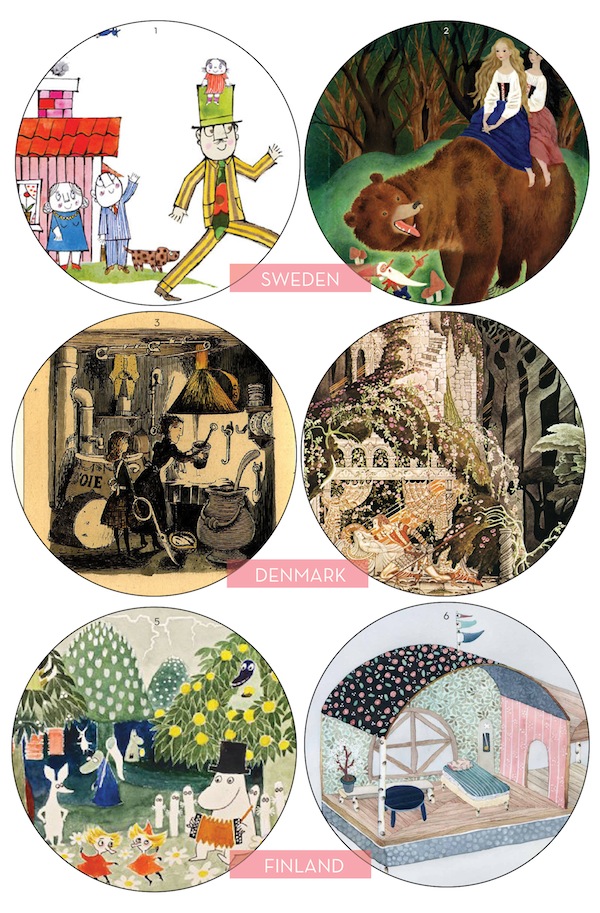 SWEDEN:
1. You may recognize some of these little characters, especially if you lived or traveled extensively in Europe when you were small! Tre Sandberg is a family-owned children's book and branding company dating back to the 1950s, that was initially begun by a married couple of illustrators: Inger and Lasse Sandberg. “Little Ghost Laban” is a popular character you might remember, and Little Anna and the Tall Uncle, pictured here.

2. Another one from your childhood! One of the most influential illustrators of today's fairy tales and animated films–Gustaf Tenggren. Aside from being in the inner circle to Disney's first illustration work in regards to animation–Tenggren also illustrated almost all of those Little Golden Books you love so dearly, such as Bedtime Stories, The Poky Little Puppy and Snow White (shown here).

DENMARK:
3. This brilliant artist passed away just last week at age 90, but his work will live on, fabulously. Danish illustrator, Erik Blegvad, is the illustrator to Bed-knob and Broomstick, Hans Christian Andersen's Stories and Fairy Tales, and some of the illustrations in the original, The Borrowers (shown here). Love the “sketchy” textural aspect to his work!

4. A 20th century artist, and another legend. Kay Nielsen's work was the inspiration for the original Disney's Sleeping Beauty. If you re-watch it today, you will notice the linear aspect that none of the other early animated features conveyed. Nielsen had a knack for fairy tales, and you can find his work in the original Little Mermaid and other fairy tales.

FINLAND:
5. We love the deliberate silliness in Tov Jansson's work. Another, slightly lesser-known artist from your childhood, Tove Jansson, was a Finland-native responsible for the wildly popular The Moomins. Jansson also dabbled in comic strips and wrote all of her Moomins books, as well as illustrated them. Shown here: Finn Family Moomintroll.

6. And how could we mention Finland without including one of our own, dear Anna Emilia Laitinen. Born in Leppävirta, a small town in Finland, she is a rising star as not only a Scandinavian illustrator, but a designer and artist as well. Check out her brand new book, Casa Di Fiaba, here.

Who are your favorite Scandinavian illustrators?

Photos as linked above