Did you catch Scandinavian Dreams: Part 1, about Sweden, Denmark and Finland? It's time for round two! Scandinavian illustration would not be complete (obviously) without Iceland and Norway–two of my most beautiful countries in the world! Although they both hide away up North, they boast some of the most talented artists. We've profiled a few inspiring artists below. Enjoy! 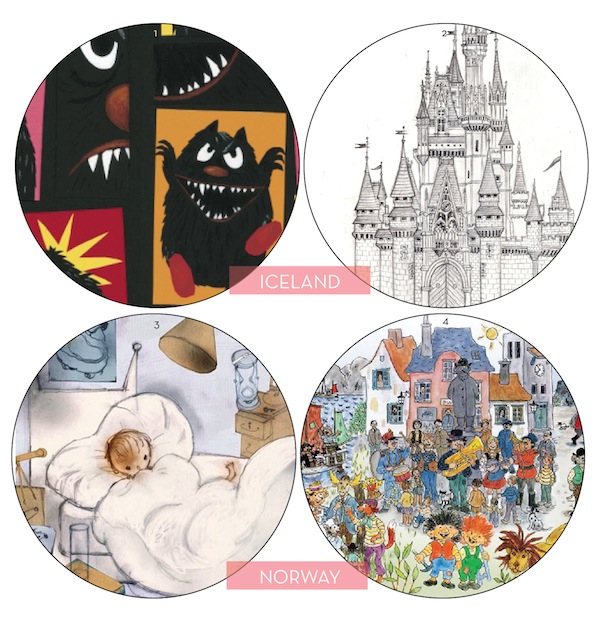 ICELAND:
1. One of the most successful contemporary illustrators in Iceland today, Áslaug Jónsdóttir is the winner of The Bookseller’s Prize in 2005, The Icelandic Illustration Award, The Reykjavik Educational Council Children’s Book Prize for her book Good Evening/Gott Kvöld. Aside from being a writer, illustrator and designer, she also makes gorgeous book art.

2. Another Icelandic up-and-coming illustrator is Erla Maria Arnadotti. We love the traditional detailing of her graphite drawings. Of Iceland, Erla says, “Growing up in an isolated country like Iceland forces people also to think about society, life and humanity vs. nature in a specific way. We have to learn how to embrace the beauty in something that usually would be considered ugly.” (Creative Crossing)

NORWAY:
3. Svein Nyhus! What a fun artist–this Norwegian illustrator illustrates his own books as well as his wife, poet Gro Dahle's work. He is most famous for his illustrations in the children's book, Why Kings and Queens Don't Wear Crowns, Princess Märtha Louise of Norway, and his hilarious illustrated rendition of the recent Ylvis viral hit, What Does the Fox Say? Ring-ding-ding-ding-dingeringeding!

4. Last but not least, composer and illustrator, Thorbjørn Egner is our only “vintage favorite” this time around. Norwegian-born in 1912, Egner is best known for his plays and musicals for children. He found success in illustration, however, with his own stories that he later adapted into plays. (Landsbókasafn Íslands, above).

All right, guys, which countries should we do next??

Images as linked above.